The Little Receiver That Could 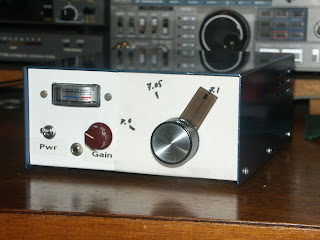 A couple of years ago, when I build my "Novice" transmitter for Straight Key Night, I figured I had to have a receiver to go with it. I used my K2/100 as the receiver in 2007 and 2008, and nearly fried my K2/100 that second time when I accidentally hooked up the transmitter into the K2 instead of the antenna.  (The K2/100 front end is really tough! It survived about 12 watts of CW for about two or three minutes)
The transmitter was built using techniques typical of the early 1960's -- all tubes, except the power supply used silicon rectifiers. I figured that the companion receiver ought to be all solid-state. And not just all solid-state -- but using nothing but integrated circuits.
Well, I'm pleased to say that I almost achieved this goal. The receiver uses one transistor, but we'll get to that in a moment.
I took my design inspiration from the Norcal Sierra, as published in the 2000 ARRL Handbook. The receiver in the Sierra uses the common NE602 Mixer / Oscillator and the MC1350 IF amplifier. An LM386 provides audio amplification.
The NE602 is a very flexible and powerful part. I'm sure the receiver builders of the 50's would have loved to have a component such as this. The oscillator block is stable, and covers a wide frequency range. The mixer is fully balanced, offers some gain, although it's dynamic range leaves something to be desired by modern standards.
The MC1350 is practically an entire IF strip in one chip. It has lots of gain, and easily applied gain control.
Perhaps the best advice for building a receiver is to start with the power supply, then proceed to the audio stages, working your way backward to the front end. Which is exactly how I began. Power comes from a 12 volt supply, but the NE602 can only take 8 volts. An LM7808 would be perfect, except I didn't have any. I did have a bunch of LM7805s, so I used one of those, and boosted the voltage by stacking four 1N4001 rectifiers in the ground lead, giving about 7.5 volts.
Next was the LM386 audio stage-- while really popular, it can be somewhat cantankerous. Initially, it was fine, but as I added stages, it become unstable and would oscillate until I put a 10 ohm resistor and .1 uF cap to ground. 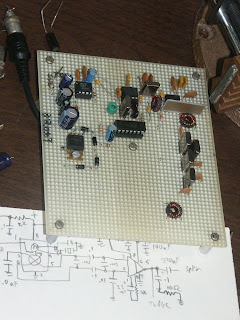 An NE602 (I used the equivalent SA612A) is the BFO and product detector. At this point, the receiver was working great. Then comes the MC1350 IF stage. it was pretty painless as well, but for some reason, the radio was less sensitive than before.
Turns out I had a solder blob shorting across the LM386 inputs. I wasted a lot of time figuring that out.
At this point, I added LM324 for the AGC amplifier. I wanted to use a 8-pin chip, like the others, but all the op amps I had required dual voltages.
By the time I finished before SKN 2008, the receiver looked as on the right. You can see a four crystal ladder filter, with matching toroids on each end. You can see the schematic evolving as I build.
At this point, the receiver consists of a 4.915 mHz IF, product detector, amplifier, and audio-derived AGC. The tricky part is the oscillator and first mixer. Another NE602 stage brings the 40m band to the IF. At 7 MHz, the oscillator would be on 11.915 MHz. This had me a little worried. I remember as a Novice trying to build a 7 MHz VFO and having trouble keeping it stable. A few turns around a T50-2 toroid, and the receiver is on frequency and quite stable.
Tuning is accomplished with a 6 pF variable capacitor. This unit has a 8:1 reduction built in, and came out of a Heathkit SW-717. By selecting the right inductance, the oscillator tunes about 150 kHz, which means about 35 kHz per turn. 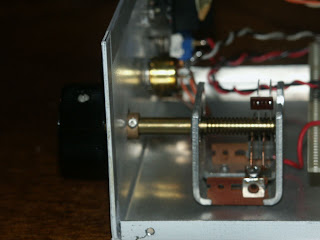 With the basic circuit going on the workbench, it was time to move everything to a nice-looking package. I had a nice painted aluminum cabinet that was perfect. It's always a bit gut-wrenching to drill into a new cabinet. The hardest part was getting the geometry of the tuning capacitor holes right, so that's where I started.
The tuning dial is made from a brass bushing and a piece of acrylic. It fastens to the main shaft of the capacitor, the inner shaft connects to the knob. I actually had to make two of these, as the first one didn't have enough clearance to allow for the thickness of the panel.
One item I wanted for the receiver was an S-meter. I found three surplus edge-on meters in the junkbox that looked perfect. I believe they may have been decided for CBs, as the top scale has S-units, the bottom is labelled Tx Power.
By this time, I had replaced the LM324 with the smaller LM358, but had one unused op amp -- which I used as a voltage follower on the AGC. This op amp drives the meter.
One last detail was muting the receiver. At this point, I abandoned my restricting on using transistors. A 2N3906 PNP transistor channels 7.5 volts to the AGC input on the MC1350 when it's base is grounded through a 10 K resistor. 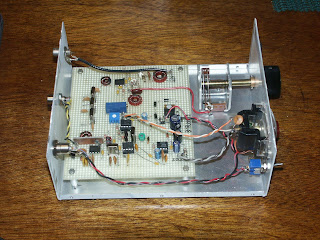 Here's a view of the inside. I had to make a few adjustments once I started using the rig. First problem was the AGC time constant was too long. Even with the rig muted, the receiver still responds to very strong signals -- and so acts as a sidetone for the transmitter. But the audio from this drives up the AGC and it would take a while to hear anything when going back to receive. I reduced the 10 M ohm resistor to a 3.3 M ohm, and this seemed to work well enough.
Second problem was the pitch of the audio was a bit high. Adding a bit of capacitance to the BFO oscillator moved the pitch down to around 700 Hz.
The ladder filter provides a modestly narrow response, even with three crystals. Single-signal reception is easy to achieve. Tuning is a little sensitive, but does not require too delicate a touch. Audio response is quite good and very listenable. It's not really microphonic, but if you tap the case roughly, you can hear a small change in frequency. This is likely caused by the long lead to the tuning capacitor.
Rig could still use a bit of refinement. First, it needs a speaker, and could use a stereo headphone jack. Second, I'm still hearing a bit of oscillation on really strong signals, so audio amplifier is probably being over-driven. Third, the frequency dial is currently the back of an old QSL card. This rig deserves something neater. Forth, I'd like to tweak the circuit, perhaps replacing the single-ended choke on the output of the MC1350 with a full toroid transformer stage. Last, the S-meter is a bit sensitive. It tends to go to S9 even on very modest signals.
Funny how much fun it is to listen to the band with a receiver you've built yourself. I get a real kick out of it.
Posted by AA4LR at 6:22 PM