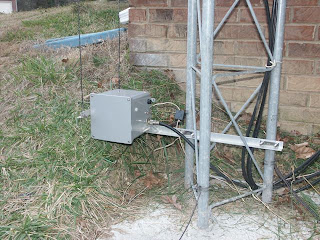 I've operated 80m since I was a Novice. With a little room in the yard, it's not hard to put up a basic 80m dipole. Getting an 80m dipole up high enough for it to be effective is not so easy.
160m is more of a challenge. A simple dipole doesn't fit in your typical yard. A quarter-wave vertical requires quite a support structure. What we need is a effective compromise antenna.
I think it was my involvement in the NAQP that got me determined to get on 160m. I had managed to make a few contacts loading whatever antennas I had and trying to call the loudest stations on the band. After I had my tower up, K9AY encouraged me to get on the ARRL 160m contest with my 80m dipole. He also suggested that I try to put up an inverted-L. I but one up for 160m with two 100 foot elevated radials. I found the 80m dipole was more effective.
W8JI once wrote that his full-sized 160m dipoles at 300 feet were only more effective than his verticals a few percent of the time, and that was only during very unusual conditions at sunrise. The way I interpreted this was that vertical antennas can be very effective on 160m, perhaps also on 80m. What I needed was a way to put up an effective vertical antenna for 160m and 80m. 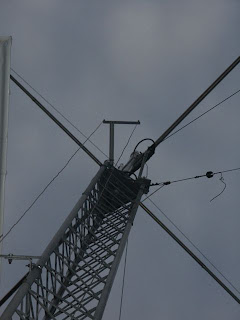 K9AY originally suggested I try to shunt feed my tower. His advice was to run a wire all the way to the top of the tower sections, then measure the impedance at the bottom, then design a matching network to match the resulting impedance. So, that's exactly what I did.
You can see the upper shunt wire mount in the photograph to the right. A piece of 1"x1" angle aluminum U-bolted to the tower provides the support for a piece of 3/4"x3/4" angle aluminum that separates two 12 gauge insulated wires. The wires are about 10 inches apart and join again another piece of 3/4"x3/4" angle aluminum fastened to a NEMA matching box at the bottom of the tower. 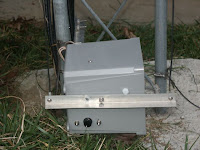 The shunt design has been through several iterations at my QTH. First was a single wire that was matched for 80m using an omega match. This worked ok, but I started with just seven 50-foot radials. When I added eight more, the shunt worked much more effectively.
At this point, I felt that all those radials might work on 160m, so I added an L-network that I could switch remotely with a relay. This worked until I added the A743 40m add-on kit to my Cushcraft A3S. The omega match no longer would load on 80m.
The Mark III match used a common tapped inductor for 160 and 80m, and a relay that switched in variable capacitors for each band. I had a lot of trouble with arcing. The Mark IV is what you see below. It uses a separate L-network for each band, switched in or out with a DPDT relay. Everything is contained within a 6x6x6 NEMA box shown below, which is mounted on a 1"x1" angle aluminum U-bolted to the tower. 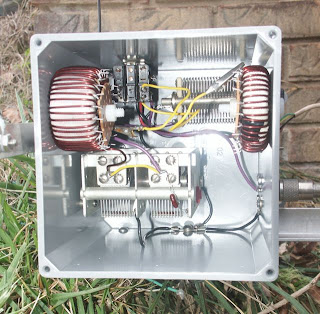 160m is on the left. The coil uses two stacked T200-2 cores with 42 turns of wire tapped every two turns. Capacitor is a dual-section which I measured at 15-325 pF per section. The small silver-mica capacitor has been replaced with a 4 kV 160 pF disc ceramic part. The result is about 180-800 pF of capacitance, of which I'm using about 750 pF.
80m is on the right. Coil is 38 turns of wire tapped every two turns. Capacitor is a 13-250 pF unit that was the plate tuning capacitor on a Heathkit HW-40.
The photograph shows enameled wire, but I've since re-wound the 160m coil with insulated wire. Biggest problem is that the heating and cooling cycles of being outdoors cause the turns to rub against each other. This eventually results in arcing between the turns when RF is applied.
The matching networks aren't designed for a lot of power. The 80m network can manage about 200W, and the 160m network only 100w. Higher power networks would require beefier networks. Except for the NEMA box and angle aluminum, this was all stuff I had in the junkbox.
Does it work? Well, I have WAS confirmed on 160m CW, with three states left to go on 80m. For DXCC, 21 confirmations on 160, and 34 confirmations on 80. Yes, this antenna works! The key to making this antenna work well are the radials. I have twenty-five 50-foot radials, plus four 100-foot radials. Or, at least, I did. Some recent septic-tank work cut several of the radials.
I plan to lay down more this summer. I put my radials straight on the ground, held close with small loops of copper wire pushed into the ground. This keeps the wire down until the grass can grow over it. Once the grass covers them, I have trouble finding the radials.
If you have a short tower, consider shunt-feeding it to get on the low bands. It's worked well for me.
Posted by AA4LR at 10:42 PM 1 comment: