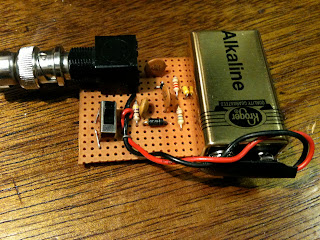 When calibrating the Elecraft K2 crystal filters, a noise generator becomes an invaluable tool. Using one results in clean spectrum traces. I had built an RX noise bridge some time ago from an ARRL Handbook -- the original article for that project appeared in the December 1987 issue of QST.

The noise source is a reversed-biased zener diode -- which produces noise of fairly broad bandwidth. A two transistor amplifier chain feeds the trifilar winding of the noise bridge transformer.

This circuit had the unusual addition of an oscillator to switch the noise off and on at about 1 kHz. This made for the very disconcerting effect of hearing 1 kHz tone no matter where the receiver was tuned. The noise bridge was intended to help me tune a manual antenna tuner without having to transmit, but it didn't work as expected.

The oscillator was useless for tuning the filters of the K2. I modified the circuit by removing the NE555 chip and jumpering pin 3 to pin 4, effectively supplying power to the zener all the time. (In fact, this very circuit appeared in the March 2002 issue of QST, and was also promoted by Tom, N0SS as a noise generator on his site)

However, the two transistor amplifier didn't seem to provide much output -- I got the strongest noise signal when attaching to the base of the first transistor. Perhaps this is why the tuner-tuner project didn't work so well. I suspect there's something wrong with one of the junkbox transistors I used.

My main problem was that I needed to jury-rig it with jumpers every time I wanted to use it. What I wanted was a dedicated noise generator -- which isn't much more than a zener diode noise source, followed by a broadband amplifier.

Since I didn't have much luck with the two-transistor amplifier, I thought of using something different. Mark, WA3YNO suggested using an LM703 as the amplifier. I had a better idea -- why not use a MMIC amplifier? The MMIC offers high gain, unconditional stability and an impedance near 50 ohms. I'm surprised we don't see more MMICs in amateur designs. I had a few MSA 0885's in my junkbox. Perfect.

Better engineers than I have already figured this out. If you look at the Elecraft N-gen, this is exactly what they did. So I build basically the same circuit on a piece of perfboard. The result -- S9+20 dB worth of noise. This circuit is so simple it's hard for it not to work right away. A switch is handy because the circuit draws over 12 mA from a 9 volt battery, so it won't last terribly long if you leave it on.

This noise generator works great. Make sure you don't ever transmit into it, though, as just a little bit of power will destroy the MMIC in short order. I generally use the Rx Antenna jack on the K2 (since I have the 160m module), so there's no chance of transmitting into the noise generator. Just make sure you switch the Rx Antenna off on that band, or you'll be wondering where your signals went. (Don't ask me how I know this)

Who Says Ham Radio Is Dying?

OK, I've been watching this for a while now, probably since I stumbled on the site in about 2004. Set up by Joe, AH0A, it tracks statistics on the FCC amateur license database. It has been very interesting to watch.
If you look at the table of total licenses, there are some predictable things happening: Advanced and Novice licenses have been dropping off steadily since they stopped issuing them back in April of 2000. In fact, there are so few of these, I wonder why the FCC doesn't just grandfather them into Extra and Technician class, respectively.
However, the number of Extra, General and Technician class licensees have been going up for some time. After the FCC stopped testing for CW proficiency, the number of Extra class licenses has skyrocketed. Technician and General class licenses have been on the rise, too, if you overlook all the licenses being upgraded to General and Extra.
But the exciting news is that Extra, General and Technician class licenses are at record levels, and the total number of licenses has surpassed it's previous record.
While certainly not all the licensees are active, it is good to see the increasing numbers. A healthy number or licenses should keep amateur radio alive for a long time.
Posted by AA4LR at 9:53 PM No comments: