I have the best wife in the entire world.

When it came time to make our Christmas lists this year, I had mentioned that it had been ten years since I bought my last ham transceiver -- I finished the KPA100 for the K2 in the fall of 2002. And while it might be time to look at something new, modern transceivers are not cheap. In the end, I decided to ask for contributions toward the "K3" fund -- money I would use to buy an Elecraft K3 at some point in the future.

Before Christmas, my wife had hinted she had gotten me something expensive. She would tease me that she had purchased a Cessna 140 or a Harley-Davidson. She did it often enough I wasn't sure what to believe.

However, due to some shipping difficulties, my present didn't arrive until three days after Christmas.

Needless to say, I was surprised to open the box find a stock K3/100!

She had the presence of mind to get me the unassembled version, instead of the factory-built. While it's a bit more work, I really enjoyed assembling my K2/100, so I figured I'd get some enjoyment out of this.

Biggest problem, though, was where to build. The Micro-Shack is, well, micro. The entire desk surface is barely 5 by 2 1/2 feet. Most of my tools are still down at the QTH in Gwinnett county. Nevertheless, I figured I'd do what I could with what I had, rather than wait a week or so until I could get to my big workbench.

As it stands, I had enough room for the job.

It was already late in the day when I got started, so I decided to forgo the Elecraft-recommended inventory. I've built a number of their kits, and I can't say I've ever been shorted a part. Indeed, they always seemed to ship me extras. In retrospect, this wasn't such a bad idea. If you've never built a kit before, inventorying the kit is a great idea.

Since all the boards are pre-assembled, there's no need to warm up a soldering iron. However, there's plenty of mechanical assembly. I thought it was weird that Elecraft has one put the left and right side panels on, only to have you remove them a few steps later.

I had never really seen the insides of a K3 before, and the pictures don't do it justice. In some ways, it really is like an over-sized K2, with the mechanical rigidity coming from the main board. Once you get the casing on, it's really pretty rugged.

Assembly was pretty much a joy, except for the limited work space. I had a great sigh of relief the first time I powered the K3 on, since it was clear I hadn't messed it up somehow.

I did have one item I did mess up during assembly. It was the KREF3 board. The instructions indicate you are to cut off any leads that might be longer than certain components on the board. I found a through-hole connector lead that I thought was a bit long, and when I tried to trim it, I also managed to bust capacitor C2 off the board. Fortunately, this component isn't used for anything critical. My guess is that it is used for FM only, but there's not really any documentation as to what the TXMIXFIL signal does. I've already contacted Elecraft support as to how they suggest we fix this.

After about six hours of work, my K3/100 was all assembled and calibrated. I only ran into one issue -- I had no dummy load to perform the Transmitter Gain Calibration. I ended up doing the calibration manually using the antennas I have on hand. Not perfect perhaps, but it will do until I can get my hands on a dummy load.

Now that it's assembled, I have to go an order the other options I need. Unfortunately, the KAT100 doesn't work with the K3. I went ahead and used some of that "K3 Fund" money and ordered the KAT3 antenna tuner as well as the KXV3A transverter adapter. That should do me for quite some time.

Now, I need to sit back and read this thick operating manual so I know how to use my new rig! See you on the bands.

Six Knots Every Ham Should Know


In working with wire antennas, I'm thankful my parents enlisted me in the boy scouts. How else would I have learned all these useful knots? Every amateur radio operator should know how to tie these six knots:

Learn these knots inside, you'll want to have them memorized for when you are ready to use them out in the field or woods. Enjoy.
Posted by AA4LR at 8:00 AM 5 comments:

Thinking Ahead to Straight Key Night 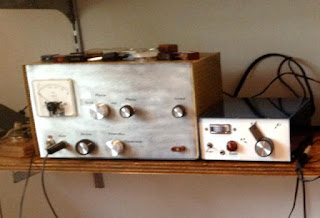 These two rigs sit in my shack all year, but I really only use them on new year's day. I'm talking about my home brew Novice Transmitter and Receiver.

Practically speaking, the transmitter isn't terribly useful. Being crystal controlled, you can't hunt around the band and answer someone -- you must call CQ. And it only covers 40m. 40m is a great band, but not everything happens there.

The receiver would be more practical to use -- it's a pretty nice superhet, with a narrow CW filter. But, really, it's designed for use with the transmitter, so it too, sits idle on the shelf.

2013 will be the seventh year I've operated Straight Key Night with this transmitter. Frankly, I'm considering cheating. Instead of using my old Japanese J-38-style clone, I'm thinking of using the Mini-MOS keyer. The whole idea of Straight Key Night is to return to our roots. Why not use this over venerable equipment? I also wonder how the transmitter will sound being keyed electronically, instead of mechanically.

If I do end up using the keyer, I'll have to disqualify myself.
Posted by AA4LR at 8:55 PM 1 comment: 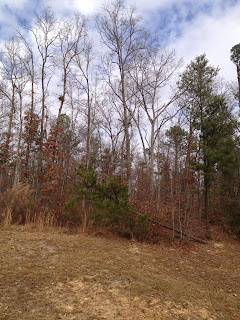 Back in 2001, when Gary Breed, K9AY, helped me to put up my tower, he suggested that I operate the ARRL 160m contest. My excuse at the time was that I had no antenna for 160m. His suggestion was simply to load up whatever I had, that this contest was an opportunity to make a lot of contacts without much of an antenna -- and, besides, it was a lot of fun.

That year, I threw together an inverted L. It wasn't much more than 140 feet of THHN house wire, mounted to a simple particle board frame that could house a series variable capacitor. I ended up removing the series capacitor and just feeding it straight through.

I only had wire and room for two 100 foot elevated radials that were about 40 degrees to each other.

The inverted L never did work right that year, and I ended up using an 80m doublet about 10m off the ground for over 200 contacts.

I never forgot that experience, and I have enjoyed the ARRL 160m contest many, many times since then. I eventually shunt-fed the tower. Over the years, I managed to work all states and over 25 countries on 160m.

Out in Floyd county, I figured I had plenty of space to try out the inverted L again. It's taken a year, but I finally put it up, as you can see from the picture above. Or not. You see, it's about 200 feet up the hill going up about 60 feet into a red oak tree. The remaining 80 or so feet goes east through the woods to another tree. Even if you know where to look, it's hard to spot. Impossible, really.

Putting down radials is more an exercise in finding wire. Copper has gotten very expensive. I bought a spool of 500 feet of 14 gauge THHN wire and cut it into quarters. ($45 at Home Depot! ouch) Then I drug the four wires into the woods. Bad idea. They ended up looking hopelessly tangled.

No matter. I've been untangling wire and rope since I was 10 years old -- I have decades of experience. It took a while, but I rolled out the four radials roughly ninety degrees to each other. I fed the antenna with over 200 feet of the Wireman's best RG-8X, Certified 118. With only four radials, I did not expect much.

I was pleasantly surprised.

The antenna isn't quite resonant in-band. My initial readings showed an SWR valley around 1860 kHz. A little high, but useable. Subsequent measurements from the shack show the low SWR is below 1750 kHz. All the coax makes the antenna broad -- just because of the line losses. (This stuff is rated at 1.5 dB loss per 100 feet at 30 MHz -- losses at 2 MHz can't be much more than 1 dB) For this years ARRL 160m, I just ignored the losses and used a tuner.

My schedule only permitted me to operate for about four hours on the second night. This antenna was extremely effective. I could work just about anyone I could year, and calling CQ was reasonably effective.

The most amazing thing about this antenna is how quiet it is. At first, I thought it might be due to all the coax and ground losses. But, since the antenna was so effective -- at least as effective as the shunt-fed tower, I've changed my mind. It's just really quiet out here in the country in Floyd county.