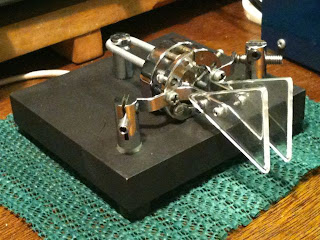 "I hate CW!" I heard a voice at a hamfest flea market recently. As I strolled up to his table, he followed up with, "You gotta help me by buying these keys."

I didn't feel like debating the finer points of operating CW with him. I was more interested in what was on the table: three sets of keyer paddles. The first was a a Heathkit HD-1410, which I knew to have a reputation for horrible feel. One other was a single-lever paddle, which I had no interest in. The third looked to be a Bencher BY-1.

I generally go to a flea market with a list of all the different things I'm looking for. I didn't this time, but I did remember I was looking for an inexpensive set of keyer paddles. The Bencher looked like it might fit the bill.

Back in 1979, when I was licensed as N8BHE, I found the progression of dits in my call difficult to send, so I opted to upgrade from a straight key to an electronic keyer. I bought a Ham-Key iambic paddle and built my own CMOS keyer. Now, the Ham-Key isn't the greatest paddle design. The base isn't quite heavy enough, the paddle arms pivot on large pins, which leaves some slop in the feel. But in 1979, it was only $30, and I've been using that same unit for 31 years.

I figure it is about time to get a second set of paddles. If you look around, you'll find they are not cheap.  There are none you can buy for less than $50, and most of them are well over $100. The item on my list read "cheap paddles." That meant finding something used, hopefully in reasonable shape.

I had used a Bencher before, back in 1980 in the Georgia Tech club station W4AQL. I remember my first experience touching those paddles. I slapped the handles so hard the armature came off the pivot. I suppose you have to use a more delicate touch than with the Ham-Key.... But I did have some success using it. This fellow had this unit marked $20. I offered him $10, then $12, and finally we agreed on $15.

As I walked away from the table with my purchase, another fellow suggested I tear the unit down completely and clean it, and it should work great. That's just what I had in mind.

Once I got home, I put the Bencher on the workbench. It was far grimier than I remembered, with a telltale film of yellow tobacco on the base and armature. During disassembly, I found the hold screws to be hopelessly bent, and one of the screws holding the round armature pedestal nearly impossible to remove. With vice grips I removed it, but this destroyed the head of the screw.

All of the metal hardware went into a small container filled with WD-40, which did a good job of removing the latent grime. I cleaned the base and plastic parts with Windex. This took off the grime, but some of the paint came off as well -- likely due to a long-standing chemical reaction of the dirt with the paint.

No matter, a couple of coats of flat-black spray paint and the base looks good as new. Then the tedious process of putting the components back together. I replaced the four screws that I could not reuse, and quickly re-assembled the unit and adjusted it to suit my fist. I followed the excellent instructions compiled by N1FN here.

The result you see pictured above. It looks great and the feel is good, too. I'm not as ham-fisted as I was back in 1980, so I haven't had any trouble springing the mechanism. The base is way heavier than the Ham-Key, so it doesn't tend to wander as much. I believe I'm really going to enjoy working CW with my Bencher paddles.
Posted by AA4LR at 11:58 PM 3 comments:

How to Bust a Pileup

I've had a great time this past month chasing the four new entities from the dissolution of the Netherlands Antilles. Even with a modest station with a small amplifier, I've been quite successful in getting through the pileups. Sure, some hams don't even have a tribander or amplifier at their disposal -- but there's no reason they can't work DX. It may just take a little more effort.


But just telling someone to listen doesn't help if they don't know what to listen for. There are several things you need to listen and find before you begin to transmit.


Next, once you can hear the DX well enough, you've got to know where he's listening. This is easy if he's working stations simplex. But, more than likely, for any reasonably sized pile-up, he'll be operating split. And that makes things more challenging.

If you have a fancy radio that allows you to listen to two frequencies at the same time, this the next step will be easier. Basically, what you have to do is listen to the DX station on his frequency, and then find the station he's working on his receive frequency.

You don't have to have the fancy radio -- you just need two VFOs and some nimble fingers. On the Elecraft K2 I use, you can hold down the A/B button, which activates the REV or reverse feature. This causes the radio to swap the VFOs it is using for receive. So, one moment you are listening to the DX station come back to someone, then you press REV to switch to the other VFO, and then hold it down while you tune around for the station being worked. But, don't hold it too long, or you'll miss the DX station's next transmission.

Sounds complicated, eh? Well, maybe. Figure also there's no guarantee you can actually hear the station the DX is coming back to. You might have to do this over and over again until you hear one. Then you have to worry that the DX station is staying in one spot -- he might be tuning around in the pileup. But the best place to be when you start transmitting is right around the place the DX station was listening last.

Once you've done this, it is probably time to start calling. If you need to tune your amp, please move a few kHz off the DX frequency before you start.

Your calls should be short -- just your full callsign, and then go back to listening. Perhaps you do this cycle two or three times, depending on the pileup. Once the DX station comes back to someone, there's no sense in continuing to transmit -- unless that stations is you.

Even though you start transmitting, you don't stop listening.

Who is the DX station working? Is he working stations in your area, or are they all on another continent? Perhaps he's working folks from all over. Listen closely to figure this out.

Who are the stations he responds to? Are they the earliest, strongest callers, or is he picking later in the pileup when the calls die down? Is he accepting or ignoring tail-enders? Figure out the pattern that the DX station is using, and use that information to place your calls better and better.

OK, you've done all that? Now is the time to have patience. Pileups can be huge random events, and if you keep on listening and carefully transmitting, you'll eventually get through. It may be on the first or second call, or it may take a half and hour of calling with no joy. Don't get discouraged.

Even so, there are a few that get away. Propagation will change, or the station will QSY or QRT. You can't help that, so don't worry about it. Most of all, don't let your worry interfere with your operating.

Careful listening can make all the difference. I've broken several pileups on the first or second call after listening to them to for several minutes. Good listening should tell you where to transmit, and precisely when.

Don't allow yourself to get frustrated and learn to enjoy the hunt.