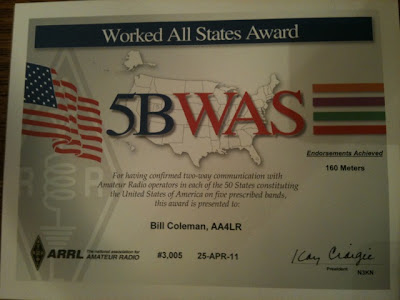 I discussed my pursuit of WAS, and then 5B WAS before.

Well, after a couple of miscues, including a lost QSL card, cancelled and re-issued credit cards, and a few month-long delays -- I finally received my 5B WAS award with the 160m endorsement.

Thank you so much to the hard-working folks at ARRL HQ for finally straightening this out. It's nice to meet a goal after 35+ years of hamming. Something that only 3,004 hams before me have done.

With this week's untimely death of Steve Jobs, I was thinking of the few times my life had intersected with Steve -- this was the closest I had come.

John Gruber recently linked to a video of this very special WWDC session. The video quality is horrible, but the talk is interesting. I remember this session well.

I was sitting somewhere on the left aisle of the audience, about 1/3 back from the front, which was my usual spot for most sessions. It was my first experience in the "reality distortion field" of Steve Jobs. I must say, there was definitely something to it.

The moment in time this talk took place is worth noting. Steve Jobs was just an "advisor" and his opinion "didn't count." A couple of weeks after this talk, Jobs would sell all but one share of his Apple stock, which would precipitate a stockholder crisis that eventually lead to the ouster of Gilbert Amelio about a month later.

Jobs would step into the resulting power vacuum and assume control. But that hadn't happened yet.

It's most interesting to look at how Jobs answered the questions from the floor. He took each one seriously, and did not try to answer right away. It was more important to give a good answer, than give a quick answer.

There was certainly controversy at this WWDC. Apple had killed off OpenDoc, which developers had been anticipating for three years. While answering questions about Newton, Jobs pointed out the difficulty companies have supporting even one application stack, much less two. Three was almost out of the question. (And Jobs would kill off Newton as soon as he gained control that summer)

Jobs discussed many of the benefits of Rhapsody, but that concept didn't last a year. By WWDC 98, Apple abandoned the Yellow Box on Windows. The development tools were good, but perhaps 5-10 times better is something of an exaggeration.

Jobs wanted Mac cloners build whatever hardware they wanted, but wanted a lot more money for the MacOS license. Even when he took control, that wouldn't happen.

And while there was no revolution with Gigibit ethernet replacing hard drives, the network certainly plays a larger and larger role today. Most interesting near the end of this talk that Jobs describes a hand-held device that has cellular networking and a hardware keyboard -- he perfectly predicts the entry of the Blackberry, which would be announced 18 months later, and would dominate its category for nearly a decade. His vision extended even to products Apple would not produce.
Posted by AA4LR at 12:21 PM No comments: