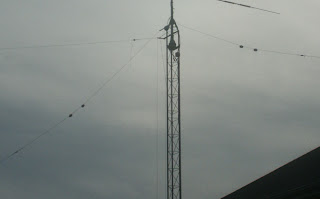 Although I've had good success using an untuned doublet on the WARC bands, I made up my mind that it would be nice to have an antenna that didn't require a tuner.

Initially, I built this antenna has a 30m / 17m dipole. The traps are made from 1.5" Schedule 40 PVC pipe, which is about 1.9" in diameter, wound with RG-59U coax. I built them in much the same manner as those I used later in the 80/40m dipole.
The 17m traps are 35 1/2" of coax wound as 4.8 turns. I trimmed these traps to 18.1 MHz. I actually built three traps, the first was a dummy form so I could figure out where I had to drill the holes to pull the coax down tight.
The 30/17m version uses 12 1/2 feet of wire in each leg, and the outer segments are 8 feet. You may have to trim the lengths to resonate the dipole in the band.
Adding 12m requires two more traps. These were made from 26 1/2" of coax wound in about 3 and 3/4 turns. Trimming the 12m traps right on frequency takes some doing, as small changes in length can shift the frequency of the trap considerably.
I inserted the 12m traps 9 feet 5 inches from the center, and then trimmed the length of the outer legs to bring resonance within the bands. I did not do a great job of measuring -- the 12m traps ended up in slightly different locations in each leg. It does not appear to affect the antenna much.
You should measure the antenna at some height, as the tuning will change as the antenna is raised. I did my initial trimming at 15 feet, and when raised to 42 feet, the resonance frequency rose over 200 kHz on 30m, and slightly less on 17m.
I built a current balun into the center mounting box for the dipole, using 10 type 43 1" ferrite beads, slipped over coax inside the box.
Since the WARC bands as so small, antenna SWR bandwidth isn't a consideration. At 42 feet, there's a little bit of a broadside pattern on 30, more so on 17m and 12m. Since I installed this antenna as an inverted V, the pattern is a bit more circular. The traps can easily handle the 700 or so watts on 17 and 12m.
The WARC bands are a lot of fun with a decent antenna. I've worked several DXpeditions with this dipole on 17m. Without sunspots, there hasn't been a whole lot of activity on 12m yet.
This sort of antenna is easy to build and install. There's no reason lack of antenna should keep you off the WARC bands.
Posted by AA4LR at 7:54 PM