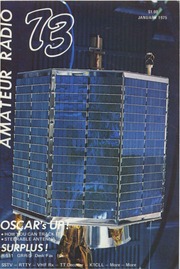 As my present for Christmas of 1974, my older brother gave me a one year subscription to 73 Magazine, starting with the January 1975 issue. This was pure genius on his part. He knew I was showing an interest in amateur radio, plus he would have the opportunity to read my copies, so he didn't need to continue his own subscription. I enjoyed the magazine so much, I continued my subscription until the magazine's demise in 2003.

1975 an exciting time in the world of the electronic hobbyist. MITS introduced the Altair 8800 in November of 1974, and other vendors soon jumped into the market. Microprocessors and related components were coming available, and 73 Magazine was writing all about it.

With the February 1976 edition, 73 Magazine added a special section called I/O, to talk about the developments with these Microprocessors. To my teenage mind, I just had to have one of these machines. They were expensive, but I slowly saved my money from my paper route.

By the spring of 1977, I fell prey to a surplus equipment advertisement from Verada 214. The ad promised a complete system with a keyboard, display, microprocessor and dual cassette decks -- the Viatron 2111 -- only $699! It seemed like a perfect way to enter into the budding world of microprocessors without spending a fortune. Although the equipment arrived as advertised, there was no microprocessor to be found -- nor any way to program the device. After studying it thoroughly for a week, I decided the purchase was a mistake. My father managed to convince the company to refund my purchase price for the cost of shipping it back.

My father could see the seriousness of my interest, so he signed me up for a summer course at the local college where he worked. This was a six week course, and the first three weeks were spent on learning about VCR and other television technology. (It really is too bad that Quasar Alpha-wrap video cassettes didn't catch on -- but they were HUGE) But the last three weeks included plenty of hands-on time with a KIM-1, the 6502-powered single-board computer. Forty years later, I can't remember what programs I wrote, but I thoroughly enjoyed that first taste of programming.

About this time, a computer shop had opened up in Morgantown, WV, about 20 miles away from my home. My parents took me there a few times. I was fascinated to see the MITS and IMSAI equipment I had read so much about over the last couple of years. But the prices were beyond my reach. These systems cost upwards of $2000, much more than I had to spend. I'd have to wait for something more affordable.