I've known for some time now that my A3S/A743 has problems. Back in March 2019, I noticed that one of the 20m traps was arcing. Then a couple of months ago, I could see that several of the trap end caps were either missing or damaged.

It's taken me several tower climbs to bring this antenna to the ground, but this weekend, we were finally able to successfully lower it down without incident.

My daughter Lauren acted as my ground crew and did an excellent job. I couldn't have done it without her.

Once the had the A3S/A743 on the ground, the next process was to carefully mark, measure and inspect the antenna. I didn't want the antenna lying on the ground. I had a roof tripod I'd picked up somewhere along the way, and with a short piece of mast, it allowed me to work on the antenna horizontal at ground level.

As soon as we had the antenna on the tripod, I marked all the traps. The original Cushcraft trap markings weather off rather easily. I used a sharpie to indicate the element, trap band, and an arrow pointing toward the boom. It will be important to reassemble the antenna with the traps in the correct direction.

Next step was to mark all the element distances. This just required a quick sharpie mark at each tubing junction.

After this, I got out a clipboard and a measuring tape, and took measurements of all element segment lengths for all three elements. I wanted to see how the antenna measurements matched up with my records. As it turns out, even after 19 years in the weather, the director and reflector elements were spot on. The driven element was a little asymmetric -- that likely happened when I added the A743 kit in 2005.

With the marking and measuring done, it was time to inspect the antenna. Overall, all of the aluminum tubing appears to be in fine shape -- nothing bent, warped or cracked. The traps were a concern. All of the trap end caps were either missing, damaged, cracked or weathered. Three of the element tips were missing, even the boom end caps bad broken.

My daughter Lauren noticed the lichen growing on the antenna. Lichen covered a few trap end caps as well as the entire DE support rope. 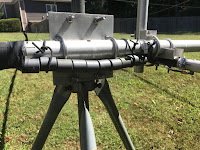 I was surprised to find the bead balun in such good shape after 19 years. The feed line it surrounded seemed rather weathered, and it is my intention to replace it.

Next, I disassembled the antenna. Because I used No-Al-Ox 19 years ago, separating the sections was easy. Once a clamp was loose, they slid right off. I removed the traps and outer sections, leaving the center part of the elements intact. The outer sections I stored in my basement, and the traps went to the workbench. The boom and center part of the elements, I lashed to my back porch for now.

With the outside work done, it was time to inspect the traps. I pulled all twenty-eight end caps off. Maybe four or five were intact, but even those are heavily weathered. I blew all traps out with compressed air, finding surprisingly little material come out, which I took as a good sign.

To know how bad it was, I had to disassemble the 20m traps. Disassembling these traps is a difficult proposition. The outer end of the trap cover is dented inward in four places to hold on to the end insulator. Because of this, it can only slide outward. The inner end of the trap cover has a double-z bend to make connection to the element tubing. If you undo the bend, the cover will slide off outward. But undoing the bend will likely break the aluminum.

For the 20m traps, the outer insulators were toast anyway, so I didn't have any trouble sliding the trap cover inward. I just had to remove the screw at the double-z bend first.

What I saw inside was not pretty. Both traps were damaged due to arcing and will need to be replaced.

I also disassembled one of the 15m DE traps. Of course I broke the double-z bend in doing so. However, the inside of the trap looked clean, and, unlike the 20m trap, the coil windings were protected with resin. I didn't think it was worth disassembling any more traps and breaking more double-z bends.

I believe the 20m traps may have suffered from too much droop on the elements and collected a lot of moisture inside the trap. Once fired up with RF, it arced and toasted the traps.

Some of the traps had corrosion evident around the hold-down screw on the trap covers. I removed the screw and put a thin layer of No-Al-Ox between the z-bend and the trap element tubing. This should limit further corrosion in this joint.