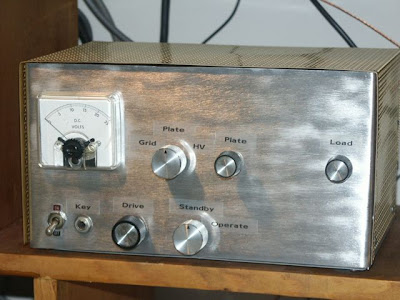 Three years ago, I discovered the remains of a project in my junkbox. It was a transmitter Istarted building when I was waiting for my Novice license, in 1975. It had seen several evolutions, but never quite worked right.
The original was a 6DQ6 crystal oscillator feeding directly to the antenna. Part of the problem was I did not have any crystals! I later changed this to a 6GK6 / 6550 design, trying to feed it with an external VFO. While the 6550 had some impressive ratings, it arced internally when I tried to feed it 800 volts on the plate. I then revised this into a 6GK6 / 6146 design following an article in the ARRL Handbook, with a built-in solid-state VFO. This actually worked, but was really chirpy and had low output. I would later discover the reason for the low output -- a bad 6146 tube.
Over the years, the useful parts had been stripped away. So, when I started, it didn't look like much, as you can see below. 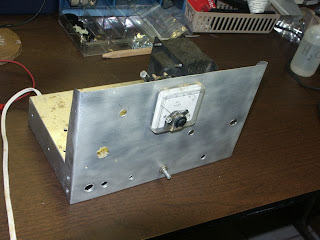 The resulting transmitter uses a design similar to those popular just before I received my Novice in 1975. The power supply has an ancient TV transformer in a full-wave diode bridge that provides 800 volts to the PA and 400 volts to the oscillator. An 0A2 regulates the screen voltage to the oscillator.
The 6CL6 functions as an electron-coupled oscillator, a design I borrowed heavily from the AA8V one-tube transmitter. It keys very cleanly through the cathode, without any attempt at shaping, with no chirp or drift.
The power amplifier uses a 6146, which is biased for cutoff without drive, so I didn't attempt to key it. The bias supply comes from a low-voltage transformer reverse-connected to the filament winding of he primary transformer. This means the key only has the oscillator cut-off voltage across the contacts, which is less than 10 volts. In all the old tube transmitter designs I've looked at, I've never seen this particular keying arrangement. Cathode-keyed designs typically developed grid bias across a resistor, which meant the PA was unbiased with no drive, so it had to be keyed. Grid-block designs typically keyed all stages, or maybe left the oscillator free-running.
The 6CL6 drives the 6146 to about 2 mA of grid current (depending on the crystal), which is plenty. I originally used a 6146A that was a little soft and could only get about 40 watts out. The NOS 6146 in now gives about 110 mA of cathode current, which is about 90 watts input, and delivers a good 50 watts output.
I first used this transmitter in 2007 for the ARRL Straight-Key Night "contest". It didn't look like much as you can see, with the unused front panel holes and no cover or bottom. However, it did work pretty well. 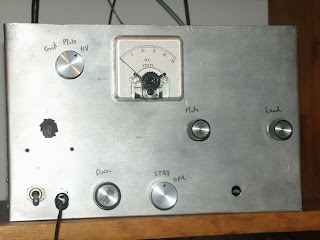 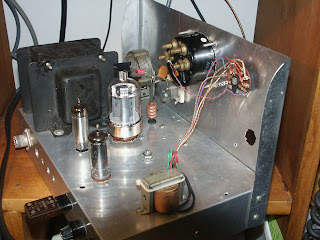 The next year brought some changes. I removed the old front panel and built a new one that was a little bit shorter. I repositioned the meter so the whole business was a bit more compact. I added a cover made out of perforated aluminum, and a bottom panel and feed. The rig also has readable control labeling, courtesy my wife's label maker. This year, I added a T/R relay that switches the antenna and provides muting for the receiver. The result is a pretty handsome little transmitter, as you can see at the top of the article.
In the days when many people were crystal controlled, people generally tuned around for answers to their CQs, since someone answering might be many kHz off your frequency. That practice was long gone by the time I got my Novice license. Using a crystal-controlled transmitter today means you have to be able to call CQ and have people answer you on your frequency. That first year on SKN I was locked on 7075 kHz. Over the last couple of years, I've purchased about eight crystals for 40m. I've made a couple of dozen contacts with this transmitter, and it has been loads of fun to build and operate.
Of course, a transmitter needs a receiver, and that is another story.
Posted by AA4LR at 9:17 AM