Putting Up a Tower - Pouring the Foundation 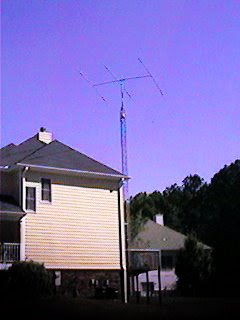 At my last QTH, I had a tribander on a roof tower. The roof tower installation wasn't perfect -- it leaked when it rained hard. I promised myself when I moved to my current QTH 14 years ago, I would put up a real tower. I sold the roof tower and put a vertical out in the yard on an eight foot mast in the meantime.
I didn't realise but it would be seven years before I finally got that tower in the air. I really owe it to my friend Mike, W1YM. He encouraged me to put up the tower, he gave me some radio-related items before he moved to Oregon to sell to help finance the project, and he supplied lots of helpful information.
During the construction process, I took several pictures using a Casio QV-11 digital camera. This was one of the earliest consumer digital cameras, so the image quality is pretty poor. I apologize in advance for the poor quality of the images. 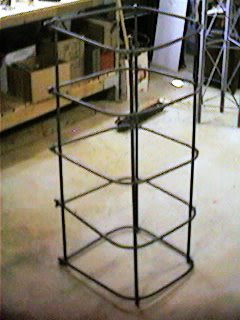 The process starts with the foundation. Rohn calls for rebar in the foundation, so the first we build the rebar cage. I built mine in the basement using just a piece of stout pipe to do the bending. Here's a photo of the completed product.
To keep the cage from skewing, I added some pieces of steel wire across the face to hold it square. You can't see the in the photo but they were necessary to help the cage retain its shape.
The second step was tricky. I had to make sure that the tower was placed exactly the right distance from the house. Too close, and the tower would lean away from the house, too far, and the tower would lean toward the house. The HB25B brackets I used only have adjustment holes every couple of inches. 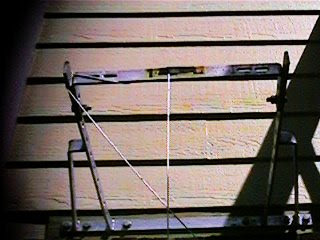 I thought the solution was pretty clever. First, I mounted a bracket to the house at about the 9 foot level. I held it in temporarily with lag screws into the rim joist.
I used a plumb bob to drop a line down to the ground level. I build a two foot square frame using a couple of 2x4s and then placed it on a reference line below the plumb bob. 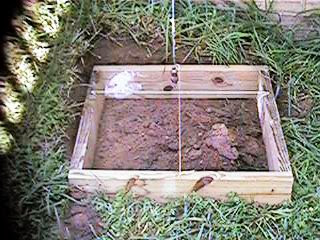 Voila! Perfect placement of the hole directly below the bracket.
I dug the hole out through the frame. An ordinary shovel worked at first, but after getting down about a foot, it was very hard to use. I ended up digging out most the hole using a post hole digger. Since the post hole digger only nibbled out a bit of dirt each time, it took a while, but it wasn't really difficult. A nursery shovel (the kind you use for planting saplings) turned out to be really handy in truing up the sizes of the hole.
With four and a half feet of my two foot square hole, the next step is to get everything in place. The bottom of the hole gets six inches of pea gravel -- which allows condensation to drain out of the tower legs. Then the rebar cage goes in after. I set mine on a set of small bricks, and made sure each side was at least three inches from the side of the hole. You don't want moisture to leach into the concrete and rust out the rebar. 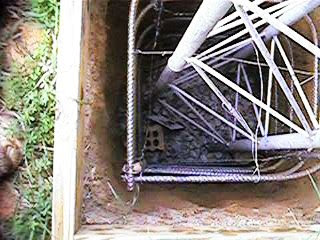 Last bit to go into the hole was the tower itself. I dropped two sections in, and then fastened to the house bracket mounted earlier. I built a small wooden fixture to hold a plumb bob line in the center of the tower. On a calm day, it's pretty easy to get the tower in line with the plumb line. Rohn only specifies the tower be vertical to within 1 degree, which is readily accomplished.
Some additional wire holds the cage to the tower sections -- so that nothing will try to move around while pouring concrete.
If you look closely, you'll note one more ingredient -- a DX QSL card, which is used to ensure good performance of the antennas attached to the tower.
OK, it's time to pour! 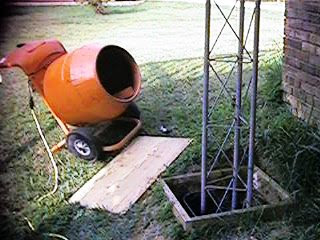 I rented an electric mixer from Home Depot. This puppy could hold two 80 lb bags of concrete mix at once. It was tough to get it to pour into the hole, but a stout piece of plywood helped. 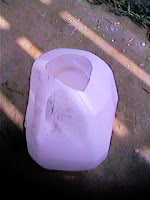 Each bag of mix requires a bit less than a gallon of water. I used a knife to cut the top off a gallon milk jug. When filled up, it was the perfect amount of water per bag.
The process for the pour went like this: 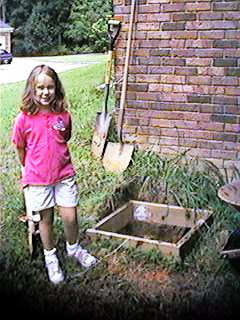 So, you may be wondering -- when did he have time to measure another jug of water between steps 1 and 4? Well I cheated. I had a bit of help -- my eldest daughter, who happened to be seven years old at the time.
The job of filling the jug fell to her, and she was quite adept at it. We mixed 28 bags of concrete in a bit under 2 hours.
With the pour complete, it took seven days to reach 90% strength, so we had to wait for the next part -- and so will you.
Posted by AA4LR at 9:31 PM