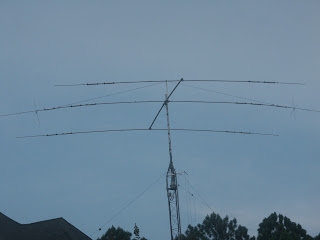 As mentioned before, I've been using a Cushcraft A3S for several years now. I purchased it back in 1989, had it up for about six years, in the basement for five, loaned out for a couple of years to W1YM, and then back up since 2001 at my QTH.
There's many things to admire about the A3S. It's quite rugged, having survived several freak Georgia ice storms, but it only weighs 25 lbs even with the 40m option. While it's one of the last tribanders designed without computer modelling, it has reasonable performance on a small boom of 14 feet. It's been a popular product both in home installtions and even for Field Day. I have one ham buddy who used to use one on a pneumatic mast mounted to his conversion van.
Here are some of the things that I have learned about the A3S and A743:
A layer of electrical tape protects the driven element insulator from the Sun. There's not much of it exposed, but the sunlight will slowly break it down over time. Covered with tape, it will last forever. Use a sharp knife to open the U-bolt holes.
The plastic trap end caps won't last forever. After about 5-8 years in the Sun, they will split. Cushcraft also thinks quite a lot of them -- replacing all 24 end caps cost me almost $50 in 2000. Try to preserve them by placing a single layer of tape around the circumference of the cap where it goes over the trap tube. The flat ends don't tend to split, since they aren't under any tension.
While it is in the instruction manual, it's pretty easy to have an element section rotate and have one or more holes pointing anywhere but down. Leave them that way, and the traps will fill up with water quickly. Get the screw clamps on tight enough so the element sections don't rotate.
The traps are designed so that the end connected to the cover tube is closest to the boom. Make sure all of them are this way. If you are not sure which way they are, you can carefully slide an end cap off to check. Mark the trap tube with an arrow using a Sharpie so you can remember. If you put the trap on backwards, it may be hard to diagnose.
Cushcraft recommends making a balun by taking six loops of coax and taping them together. WA2SRQ wrote a posting to TowerTalk back in 1996 that showed that such a balun is much more effective when the turns are in a single layer and do not overlap or bunch. Six turns of coax on a 4 inch PVC form should work nicely. Ferrite beads a foot and a half long works well, too. I found a set of 10 of ferrite beads large enough to fit over RG-8 and wired them underneath the boom.
With the A743 option, the driven element droops far too much, so Cushcraft includes a non-conductive support rope and support mast. The instructions show the support rope should have a twist right at the top of the support mast. The twist prevents the rope from sliding back and forth through the plastic grommet as the driven element moves in the wind. It will eventually break. Don't ask me how I know -- just remember to include the twist. 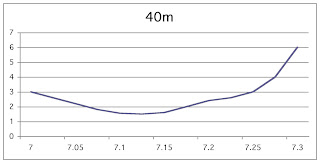 The A3S offers three choices of spacings along the elements, CW, MID and Phone. I took a tip from K7LXC. With the Cushcraft 40-2CD,
Steve recommends going half-way between the CW and MID settings.
The last time I had my A3S up, I used the Phone settings, and the SWR was very high at the bottom of the bands. So, I used values that were midway between CW and MID. 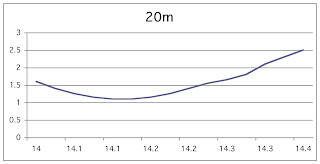 This results in a good compromise in covering the entire band. Here's the SWR curves through about 130 feet of RG-213.
Based on these graphs, I could probably shorten up the spacing between the 20m and 15m traps, and the 10m traps and the boom. 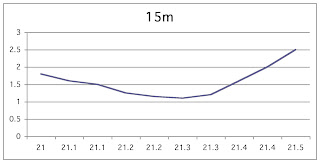 Regardless of the values you use, double check the measurements before putting the antenna up. When I first put up the A3S, the 10m director spacing was about six inches too short. You couldn' t tell from the SWR curves, but the antenna likely did not work as it should. 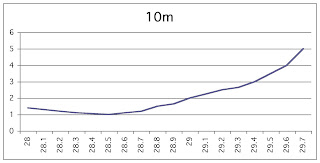 There may be better tribanders you can buy, but the Cushcraft A3S is a great performer. The A743 option adds 40m. At my QTH, this is my best 40m antenna, partly because it is mounted higher than anything else. Being able to rotate the pattern is often helpful in crowded contest conditions.
Posted by AA4LR at 8:16 PM